Here are some picture on how our boys keep there cages. Mr Mario is neat and clean. Very relax, probably due to him being neutered. And King Binky is crazy, wild and messy. Good with bathroom habits. But loves to shred and play with paper, boxes and his new “Bunny Friend”. Yes Binky has a stuff animal who is a bunny. No he not neutered yet and yes he does “play” with it.  🙂

So everyone knows how important hay is for rabbits. The hay files down their teeth naturally and helps with digestion. On valentines day  the bf and I found a  black  male lionhead. Major case of Malocclusion . Who ever had him didn’t care for him  properly or didn’t want to care for hes teeth.  He is a sweetie. Lets us take pictures of hes teeth and poke around to get a good look at him. Other then his teeth his healthy.

We saw the vet today and she wants him at about 5 pounds. Hes a little under weight. With being with us since valentines day, he was at 3 pounds, and now he weighs 4 pounds and 6 ounces.  They filed down his three front incisors. One of the bottom ones had broken off at some point. and the other bottom was at the middle of his nose. His molars are going to be need some filing also but they have to put him under to do that. She said his has a wave pattern with his molars.  But she wants to see if the hay will now help with it, since now he can eat properly.  Poor little guy. and to think some one just dumped him outside, instead of helping him.

Here a few pictures of the tortoises that roam the room with the bunnies.

Mel and Herbie in the back

Here is a funny story of Miss Cuteness.

So at night we have been letting Mr. Mario out. He has been doing wonderful loose overnight. There have been times when i have gotten up in the middle of the night and he staring at us. Kinda creepy. Well this morning we let Miss Cuteness out as we were laying in bed. Boy did she have a early start on the caffeine. She was doing laps around the room, binkying so high and landing on boxes and then shooting off across the room. Then she decided to jump on the bed and do TONS of binkys. Which even included landing on my head! After about an hour of this, she then fell short of energy and did dead bunny at my feet at the end of the bed.  For a little thing she does have a lot of energy! Last night we weighed her and she now weighs 4 1/2 pounds or so at 3 1/2 months.  She has doubled in her weight since December when the bf brought her home.

All while this was going on this morning  Mr. Mario relaxed on the floor next to the bed. He even jumped up on the bed by us and investigated for a bit,which is odd since he doesn’t really jump up on anything,  then went on his way lounging around the room.

They have been doing great with the bounding process. Miss Cuteness has been seen jumping in Mr. Mario’s cage and joining him while he eats or stealing his food and hay and we even even seen the both of them laying next to each other, sometimes Miss Cuteness does dead bunny next to him for a few seconds. We just haven’t been lucky enough to take a picture while they are doing this yet. Hopefully we will be able to. Its sooooo cute.

Well with recent events, things will be changing yet again. My parents are moving more towards central WI. And my sister and her bf will still be living at our current house. That means Miss Brittany and I will be moving into a much bigger bedroom in the house.  She will defiantly get more play time out of her cage then what she does now.  I’m hoping to turn her into a free roaming bun in my room over time. Since she is very shy, that might take sometime to do.

So with that things are going to be very busy over the next week. I have a few job interviews and tons of school work. We also might not have internet for a couple of months. Till things settle down. Hoping it doesn’t take long for that. Till then i will be using the library, mybf’s, school and where ever else i can.

We took Binky out in the snow on Tuesday,  the day before the big storm hit south eastern WI.  He seemed to enjoy the snow. 🙂  Next we plan on taking Mario out outside to play in the snow for a bit. We think Cuteness is  too young to go out in the cold like that yet so she will have to wait till next year.

If you are on any of these sites. Please feel free to connect with us! We would LOVE it if you do!

Mario and Cuteness are getting along fine. Though sometimes Mario will nip at her when she is being a spaz. Mario has also been spending time out of his cage at night. So far so good. Though he has been caught staring at the bf in the middle of the night. O.o

Binky seems to be getting along with everyone through bars. Hopefully soon he will be off to the vet.  Binky has also taken a trip out in the snow a few times. On the days where its not so clod and windy, kinda hard in Wi.

Cuteness once she is old enough, will also be spayed. I’m planning on having Brittany spayed also this year. So lots of vet appointments  this year. 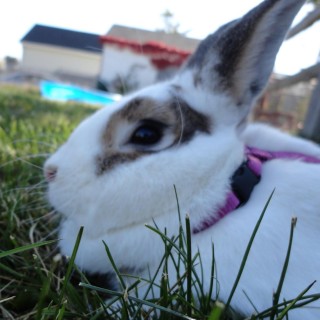